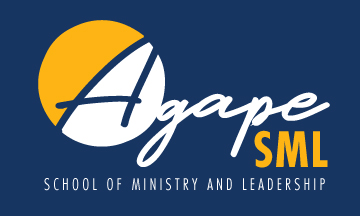 AgapeSML school of discipleship is a two-year (approximately) bible course in an ordered learning environment designed for any believer who desires to pursue God’s wisdom and biblical thinking through the serious study of the word and the way of the apostles. One of the missing links in today’s Christianity is discipleship, which is “the orientation of the soul for the purpose of acquiring wisdom, which every believer needs regardless of their position in life.”

We believe the average believer today, worldwide, is in need of serious, ordered learning. The early church devoted a lot of time to serious study and learning in the word (Acts 2:42, Acts 19:9). Today, however, there is no longer a sense of serious ordered learning that the churches steward and expect every believer to master. We have lost the sense of any serious ordered learning for believers. It has been replaced with shallow material that is individualistic and need-driven, requiring very little thinking and placing very few demands on its learners.

The school of discipleship uses the First Principles Series. Throughout church history, it has been understood that there is a clear teaching in which every believer needs to be carefully trained. In the New Testament church, this is called “The Teaching” or “The Didache,” which is Greek for teaching.

The First Principles Series is not just another study. It is a new approach, introduces a new method, and demands acquiring new skills. You will study how the Early Church was formed and how it trained its people and its leaders. You will study most of the main passages that contain the teaching found in the letters to the churches. From those passages, you will draw out the Apostles’ teaching and create your own summary. You will then learn to study key letters to the early churches in the order that they were delivered and establish a pattern of study that can be built upon for a lifetime.

The goal of The First Principles Series is to lay a foundation of the first principles of the faith in the lives of believers—a foundation that is so strong that not only will they be able to think biblically from here-on-out as they live their lives, but also that they will desire to begin a journey toward the lifelong pursuit of wisdom.

Year 1 of School of Discipleship uses Series 1 and 2 of The First Principles, consisting of 8 books and 48 lessons. The class will be completed in about 49 weeks (Approximately one year). The cost is $400 for the entire program including the eight books ($200 if you are age 22 and below).  Year 1 starts every January.
You can choose to pay the $400 in full or in 8 automatic installments payment of $50/month.
Pay Here

Year 2 of School of Discipleship uses Series 3 of The First Principles consisting of 5 books and 33 lessons. The class will be completed in about 36 weeks (approximately 9 months). You must complete Year 1to be allowed to take Year 2. The cost is $400 for the entire program, including the five books. The program starts every January. Registration opens in November.

Students will meet via Zoom for 1 hour once a week.